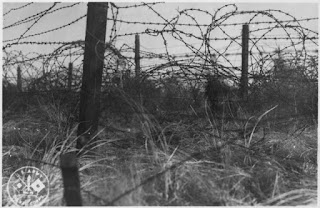 This article talks about the making and application of the soldiers favourite “Barbed Wire’.

It was originally published in 'the Illustrated War News', on December 5, 1915

“Barbed Wire is serving a purpose in the war perhaps only second in importance to munitions properly so called shells and bullets.

It supplies, in fact, the materials of which are constructed the first of the lines of defence everywhere, utilised, as it is, to form the outer barrier-network in front of fortifications of every kind, alike for entrenched positions in field operations, and for guarding, as an obstacle, the exterior lines of permanently constructed works such as fortresses. Thousands on thousands of yards of it - miles and miles, indeed - are spread out all over the fighting areas: in Belgium, in France, on the Russian-Polish frontier, in Gallipoli and Mesopotamia; and the breaking of gaps through it, or its clearing away in action, is an essential preliminary that the artillery has invariably to perform before attacks are possible.

Barbed wire is said to have been invented by a veteran of the American War of Secession, a Colonel Elbridge, who is said to have begun by experimenting with his wife's hair-pins. He used up so many that the lady one day took him to task for this waste. "Do not shout," he answered; "these hair-pins will bring us a fortune," - and indeed after many rebuffs, his invention gained widespread favour among the farmers in the United States for fencing.

When the Steel Trust was formed, the late Pierpont Morgan bought up Colonel Elbridge's works and patents for a sum which is said to have been, roughly, two millions sterling. In war, barbed wire was first used by the Boers in the Transvaal; and later, in Manchuria, both Russians and Japanese made ample use of it, as, in the Balkan wars, the Turks and the Bulgarians did. Now all over Europe its use is, of course, universal.

The wire-drawing works in the first place supply the wire to the barbed-wire factories in rolls or coils, and the manufacturers use it as received in the preliminary work of the winding-machine. The spools, carrying alternating carriages over each, furnish one of the wires for the manufacture of the main strands. The second wire requires a machine which turns the wire out in the shape of spiral springs with superimposed turns. These spring-shaped spirals are made from wire in coils or previously spooled. The carriage serves to regulate the feed of the wire as it winds on a rod, the size of these spirals varying according to the "looms" for "spinning" the wire.

Three twist barbed wire, the form of barbed wire used in the war, is made by means of a very ingenious machine the object of which is to plait three galvanised wires. Two of these form the body of the wire; the third serves to form the barbs. In the course of the plaiting operation, these barbs are automatically wound on one of the wires which is joined up to the second through the agency of rollers. The twist is then effected, and the barbed wire, as each length becomes terminated, is wound off on to a frame which facilitates its subsequent unwinding. The illustrations opposite show a machine in one of the factory workshops. As the mechanism works, a small knife automatically determines the place of each of the barbs of one of the wires of the twisted strand.

An eccentric at the same time feeds the barbed wire on a kind of finger, making it go through a double coil, after which it cuts the barb aslant to from the sharp point. During the continuous movement of the twist, the wire carrying the barb advances five to eleven centimetres, in the case of close set or ordinary barbs by the aid of a cam, and the following barb is only wound on the same wire when it has traversed the mechanically adjusted distance of pitch or separation.

Barbed wire costs about seven and sixpence per hundred yards. As every bombardment or clearing away of barbed-wire defences at one place means replacement by fresh entanglements further back, the expenditure on this one item must mean an appreciable sum in the outlay of the various belligerents.”
Posted by alan1704 at Tuesday, March 10, 2020 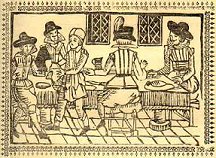